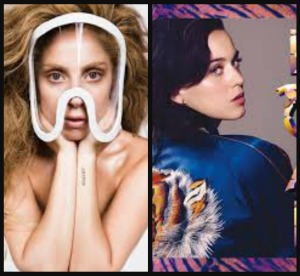 Lady Gaga and Katy Perry’s new singles were leaked over the weekend.

Katy Perry’s “Roar” leak forced her to pull her big reveal on New York’s Z100 radio station. Instead, she released her new single with a lyric video that debuted online at midnight on her Vevo account. The video itself looks like a series of back and forth text messages filled with emoticons. Here is the link to the video below:

The leak on Lady Gaga’s new single “applause” was revealed to be only a snipet, but put out a week before it was scheduled to, It was initially thought Gaga was still going to on with her plans to keep the full song under wraps, but the song was released only thirteen hours after Perry released hers. The Mother Monster released the audio to the single on her Vevo account as well.

Both singers took to Twitter to voice their frustration and support each other.

“Wanna grab some shovels and f–k up some hackers?” Lady Gaga tweeted. Mother Monster added another tweet that referred to a fender-bender involving Perry’s promotional truck for her upcoming album, Prism. “@katyperry excited to hear your ROAR, sorry to hear about your truck!”

Perry later tweeted back, “@ladygaga what a WILD weekend so far…claws out, paws up! Looking forward to puttin my hands up & making them touch too!”