Unless you’re hiding under a rock or something, you probably know that yet another Teenage Mutant Ninja Turtles movie is set to debut in theaters June 6, 2014. And if you’re like me, you’ve probably been confusing yourself by thinking up all the ways this movie could possibly suck.

Yes, I am that asshole.

Anyways, try as I may to put my irrational fears about this movie to rest, my brain refused and I was left with only some very interesting thoughts.

In short, here are three things that totally baffle me about this f*cking movie:

I was actually tempted to put Micheal Bay on the list all three times, but I figured that that would be a waste of good ranting space.

Moving on, I am still utterly baffled as to how Micheal Bay was pulled onto the project in the first place (Okay, so I know Nickelodeon recruited him when they secured rights to the Teenage Mutant Ninja Turtles and all, but still!). Granted, I don’t hate Bay or anything. In fact, I will give him due credit for his hand in directing films like Bad Boys, Bad Boys 2, Pearl Harbor, Armageddon, and the first Transformers movie.

However, most people weren’t fans of the following Transformers movies—Transformers: Revenge of the Fallen and Transformers: Dark of the Moon. And on top of that, Bay has this signature style where he feels the need to make everything explode.

Oh. Didn’t know that I had walked into a Micheal Bay movie. My apologies.

I know most if this is semi-irrelevant, since he’s not directing, (Jonathan Liebesman is), but I still can’t help but be somewhat apprehensive about his involvement. Call me that person, but hey.

I know this is at #2 and all, but I’m really tempted to say that this is probably the most baffling part about this movie of all.

I say this because way back, on January 30th, 2012, some courageous person was brave enough to leak the tentative script for the movie—which was, at the time, set to be released in theaters earlier than it’s current date, June 6th, 2014. The script was basically considered sacrilegious in the fact that it included the following changes:

– Shredder was instead “Colonel Schrader”, a government agent who is secretly an alien who can grow blades from his body.

-The Turtles originated from a different dimension completely that was comprised of turtle warriors.

-Splinter happened to be an alien from that same dimension.

-Casey Jones was now an 18-year-old security guard/amateur hockey player/whatever-the-f*ck-else who finds the Turtles and happens to be the focus of the movie. He was experiencing relationship difficulties with girlfriend April—also 18—who was on her way to success in scoring a CBS internship in New York.

-Michelangelo also managed to fall in love with some turtle chick from his home planet.

-And finally, Raphael was the comic relief instead of Michelangelo.

I bet you were waiting for this, weren’t you? Well tough.

I know what you’re thinking.

But yes, that did in fact happen and it was later brushed aside as a script that was dumped long before Bay and company arrived on the scene. However, I’m not so sure. Even if that was/is the case, that still doesn’t put me at ease.

Because my next question would be: if that was the first/early script, what the f*ck can we expect from the current script and is it going to be just as bad?

Well, I don’t know and that alone makes me concerned for what is to come.

I have to mention the cast really quick. I just have to.

In the months since the whole script fiasco had happened, general news that arose from the TMNT camp didn’t make anyone feel any better. The movie date had been pushed back and plenty of people were still trying to erase that horrid first script from their minds.

However, things apparently got laughably worse when members of the cast were announced.

And when I say members, I actually only mean member, which happened to be……

Most people were okay with random, albeit awesome casting picks like Whoopi Golderg, Will Arnett, and William Fichter. However, when Megan Fox was announced as April O’Neal, the internet and fans everywhere raged. I chalk this up to three reasons:

1. Megan Fox is nice to look at, but her acting abilities are questionable at best (That is also putting it nicely).

2. April O’Neal ≠ Megan Fox (There are just no words).

3. The world thought that Micheal Bay couldn’t’ f*cking stand Megan Fox (I mean, with her huge-ass exit from the Transformers franchise and their apparently colossal fallout, who didn’t think that?!).

Man, I was already worried about the Turtles being cast and at all, (sh*t, I still am), but Fox’s casting definitely added like an extra layer of headaches. 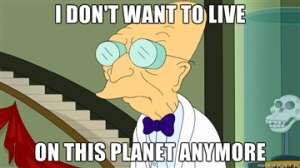 In closing, I hope I’m just being a pessimistic asshole and that the movie is actually really great when it comes out.

Until then, however, I plan to avoid it like the plague.

Agree? Think I’m being silly? Sound off below!