And he’s back with a vengeance. 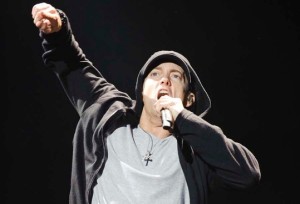 Not that he left or anything.

Anyways, a commercial for Eminem’s new single and album debuted during the VMAs yesterday and finally announced the release date for the album. MMLP2 (which presumably stands for Marshall Mathers LP 2), is the name of the album and will be a follow-up to 2010’s Recovery. Eminem also promoted the album on his Twitter feed and on his Instagram, twice.

E! News is reporting that the album will also serve as a sequel to Eminem’s critically acclaimed The Marshall Mathers LP that debuted 2000 and spawned hits like “The Real Slim Shady” and sold 27 million copies worldwide.

Here’s the ad for the commercial below:

And just in case you missed the drop of his previous single, Survival featuring Liz Rodrigues:

MMLP2 will be dropping into stores on November 5, 2013—which also happens to be the Call of Duty: Ghosts release date.

That’s going to be a really good day.

Excited for Eminem’s new album? Sound off below!