If you were were thoroughly satisfied with season four of arrested development, then Screen Rant has some interesting news for you.

As most of you are aware, season four ended on somewhat of a cliffhanger. Despite that, Mitch Hurwitz (creator) and Ted Sarandos (Netflix Chief Creative Officer) were both previously quoted as saying that “there would definitely be more Arrested Development on Netflix”. It was expected to manifest either as a movie or more seasons in the TV series. However, Hurtwitz recently sat down with Rolling Stone to announce that he’s officially in the process of writing an Arrested Development movie.

Here’s what he had to say:

“I’m working on the movie right now. I can’t get into much more detail because I don’t want to scare anybody off. I don’t want to be more presumptuous about it. I don’t own the property outright – it’s a 20th Century Fox property. But everybody seems really into it and really eager to make a movie.”

Rolling Stone then asked why he wasn’t just following up with another season and here was Hurtwitz reply to that:

“A TV season is a six-month commitment. But I think it would be very doable to get [the entire cast] together for four or five weeks to make a movie.”

Try to contain your enthusiasm.

A lot of fans have previously complained that there weren’t enough scenes of the Bluths all together ( a la orignal series-style); so the prospect of a movie definitely sounds awesome and would definitely be bringing the crew together some more. 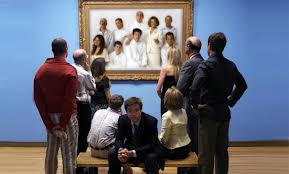 Ladies and Gentelman, the Bluths.

Anyways, when asked about when the movie might go into production, Hurtwitz said:

“I’m hoping it happens as soon as possible. But I want to be very careful about not putting out false information. I want to get a time and tell everybody when it’s happening and not play with people. Right now, I’m trying to do something else for Netflix and a movie project and things. I’m always sort of superstitious about talking about this stuff before it happens. It’s the best way to guarantee it doesn’t happen.”

Thank you for not playing with the emotions of your fans.

Moving on, if Netflix has their way, this aforementioned movie will probably be premiering on Netflix also. Although, we’ll have to wait on that bit of news. Hopefully, we’ll hear something about that soon?

Who the hell knows?

Anyways, Rolling Stone described Hurwitz end goal as trying to get the movie made first and then add on another season of the show. This is good news for all you people who binge-watched the f*ck out of season four and finished it in like three days.

But it’s cool. No judgment here.

In closing, here’s to hoping that the Arrested Development movie and season five do awesomely well.

Excited for more Arrested Development? Sound off below!