According to E! News, Coldplay recently rolled out some new cover art for their new song, “Atlas” which will be featured on the upcoming soundtrack to The Hunger Games: Catching Fire.

In the new cover art, Jennifer Lawrence‘s bad-ass protagonist, Katniss Everdeen, stands all alone on the top of a large rock formation, looking into the distance. As expected, she has her bow and arrow at her side. Frontman Chris Martin posted the image on Coldplay’s Twitter feed recently.

Here’s the image below: 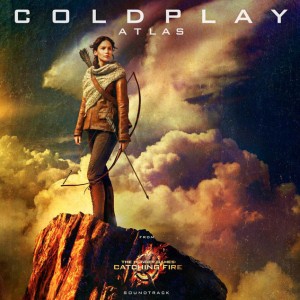 I’ve gotta say that I am mucho impressed.

Anyways, “Atlas” will be one of the first new songs from Coldplay since their best-selling album Mylo Xyloto was released in 2011. It will also be the first time that Coldplay has every lent their talents to a feature film.

The soundtrack for Catching Fire will hit stores some time in September, which happens to be about three months before the movie itself hits theaters.

Here’s to hoping Catching Fire is as riveting and as awesome as it’s being shaped up to be.

I will definitely be volunteering myself to see this movie.

Catching Fire will be scorching into theaters on November 22, 2013.

What do you think? Does Katniss look bad-ass enough? Sound off below!