And by “unknown role”, I really mean most likely Captain Marvel (previously known as Ms. Marvel).

Although, I’m still hoping for Yvonne Strahovski, but Katee Sackhoff would be cool too. 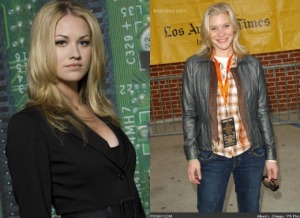 Strahovski on the left and Katee Sackhoff on the right.

Moving on, according to Schmoes Knows Movies, Marvel has their eyes set on Sackhoff for a yet to be announced role:

Sackhoff was oddly selective about what she said and explained that she wasn’t too clear on who exactly she met, since she’s “not very good at that stuff” (Schmoes Knows Movies).

Back to this mention of 2014, if Marvel’s serious about checking Sackhoff’s schedule and what not, we could probably expect to see her (if talks continue and are confirmed) in the Avengers sequel or maybe in a One-Shot.

So, what do you guys think? Would Sackhoff make an excellent pick or did you have someone else in mind for the role of Captain Marvel/Ms. Marvel? Let us know in the comments below!