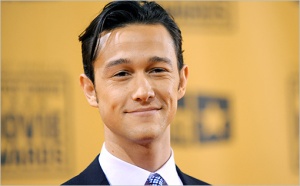 Joseph Gordon-Levitt is gracing this months cover of Out magazine and talking about his reaction to fame, his brother, and rumors that he’s gay.

When asked about how he’s handled being in the spotlight, he explained that self-perseverance has become a learned skill set.

“It can be really awkward and difficult to be thought of as this thing on TV,” he told the mag. “Before understanding it or being able to analyze it, I just knew it made me really anxious.”

He also spoke on why his successful record company, hitRECord, reminds him of his late brother, Daniel.

“He was so overwhelmingly positive and warm. One of my favorite things about hitRECord is how positive it is, especially compared to most of what goes on on the Internet, which can be snarky and cynical. I credit Dan with that.”

He added, “He couldn’t help but get swept up in it, and it makes me so happy that the momentum continues today. I’m on the site every day, and the fact there’s this warmth to it, it reminds me of him every time.”

Joseph Gordon-Levitt also opened about the important values that he and his brother were taught by their parents while growing up.

“I think they both instilled into me and my brother the feeling that we’re part of the world, and that that’s important—that we’re all connected and everyone’s well-being is tied to each other,” he explained.

“They’re hippies, but they were not so much about being flower children as getting something done, trying to stop this war, or changing civil rights or the feminist movement—and they still are that way.”

When asked why he won’t refute talk that he’s gay he said, “That would be really tacky—they would win if I had to clarify.”

One thought on “Joseph Gordon-Levitt on the Cover of Out Magazine; Addresses Gay Rumors”