So, I’m usually like this when it comes to video game-to-movie adaptions:

Except if we’re talking Assassin’s Creed. That sh*t is practically a movie in itself as a video game. If Ubisoft actually finds away to f*ck that up, I will actually be shocked.

Also, any movie that has Michael Fassbender involved in any capacity is a welcome movie to me.

But anyways, back to the subject of Need For Speed, Breaking Bad‘s Aaron Paul will most definitely be leading this movie along with Dominic Cooper (Captain America) and thanks to Entertainment Weekly, we can see the two of them in action (sort of).

Recently, Entertainment Weekly was able to score a couple of stills from the movie and ironically enough, there are no cars.

However, we do get to see Paul with cool new hair and Cooper looking rather villanious and suspicious. We also get a peek at Dakota Johnson and Kid Cudi in whatever roles they will be playing: 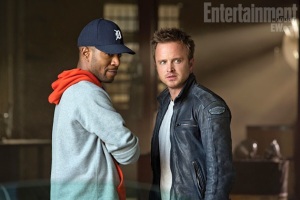 Now, if you’re that person who’s thinking, “well sh*t. Have we got another Fast and Furious franchise on our hands?”,  Aaron Paul has this to say to you:

“This set was different than anything I’ve been on. You’re walking through a very thick cloud of testosterone….It’s really a throwback to the Steve McQueen era of car movies. I think people are going to be pleasantly surprised.”

Well, I’ll take your word for it, Aaron.

Other than the stills from above, no one’s seen or heard much about this movie, unless you’re relying on knowledge from the video games. But as we all know, film adaptations sometimes like to differentiate themselves from their original source material; so, we’ll just have to wait and see.

However, if you’re still questioning what this movie is about, here’s a tinsy tidbit about it:

He [Aaron Paul] plays a street racer who, betrayed by his former partner, enters a major race as part of a revenge scheme (Screen Crush).

If we’re going off of photogenic evidence, Cooper definitely looks like the backstabber in question, but I’m sure that it may be way more complicated than that (you can read more about Cooper and his role here).