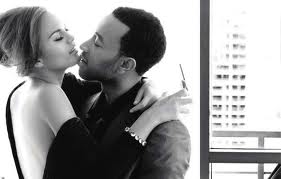 E! News has confirmed that singer John Legend and his main model lady Chrissy Teigen got married this Saturday in an intimate ceremony at an estate on Italy’s posh Lake Como.

Legend and his wife, who’ve been dating since 2007, got engaged in December 2011 when the Grammy winner popped the question during their holiday vacation in the Maldives.

Once she said yes, Teigen was in wedding planning mode—well, sort of. When asked about details she stayed mum, but wasn’t afraid to drop a few clues.

“In my mind it’s just like an explosion of ideas, but on paper it is just absolutely nothing,” she told E! News. “I’ll tell you this—the ceremony will be short.”

The 27-year-old also said that when it came to her dress, she didn’t “want anything too satiny, shiny, or crazy. I’m not going to be that ball gown girl at all. I don’t want to shock the guy coming down the aisle. I just want to be myself.”

When interviewed at Fashion Week Teigen spilled that she would be flaunting her model figure in not one but three dresses,”Every time I went in [to Vera Wang] for a fitting, I couldn’t stop getting one,” Teigen explained. “It’s just too pretty.”

She also recently revealed to E! News that absolutely nothing is going to come between her and her wedding dress.

Teigen revealed on E!’s Fashion Police that she’ll be going commando when she struts her stuff down the aisle.

Congrats to the newly married couple! 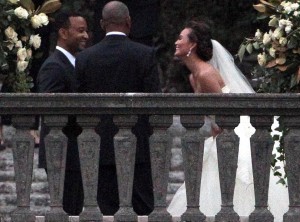