The original Material Girl, Madonna, opened up in a revealing article for the latest issue of Harper’s Bazaar.

The pop icon, who penned the article herself, touched upon making it in New York City at a young age, being “daring” and raising a family of four children. The most shocking part of the living legend’s mini tell-all is centered around the topic of sexual abuse. Madonna explains that she was raped during her early days in the Big Apple, and that she faced all types of violence and prejudice while trying to make a name for herself.

“New York wasn’t everything I thought it would be. It did not welcome me with open arms,” she explained. “The first year, I was held up at gunpoint. Raped on the roof of a building I was dragged up to with a knife in my back, and had my apartment broken into three times. I don’t know why; I had nothing of value after they took my radio the first time.” 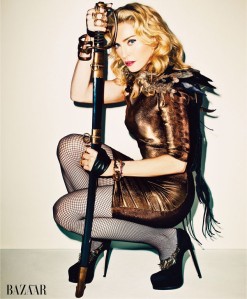 In the article she added, “I was poised for survival. I felt alive. But I was also scared s–tless.” But the rough times only seemed to make Madonna stronger-thank jeebus, where would I be without Madge.

But with age (and years of living in fast-paced New York City), comes wisdom.

“Years later, here I am, divorced and living in New York. I have been blessed with four amazing children. I try to teach them to think outside the box. To be daring. To choose to do things because they are the right thing to do, not because everybody else is doing them,” she wrote. “The idea of being daring has become the norm for me. Of course, this is all about perception because asking questions, challenging people’s ideas and belief systems, and defending those who don’t have a voice have become a part of my everyday life. In my book, it is normal.”

The “Vogue” singer also weighed in on something that famous songstresses the likes of Rihanna or Miley Cyrus can possibly relate to:

“When you’re 25, it’s a little bit easier to be daring, especially if you are a pop star, because eccentric behavior is expected from you,” she said.

Let’s just hope it stays at early twenties and is just a phase.