As promised Justin Bieber has released his new single “Heartbreaker” officially beginning his ‘Music Mondays’ series. The song may actually be his best work, and has seemed to be changing negative opinions about him as an artist. Twitter, as well as a number of other social media sites, have been buzzing all day, with people raving about the new hit.

“Heartbreaker” has a very R&B feel to it, and you can hear the maturity in his voice. The song is basically about his feelings following his very public break up with Selena Gomez. The track was released with the following message:

“It’s a song for people going through a heartbreak – like I was when I wrote it. It means so much to me to be able to share what I was going through, with my fans. I’m very proud of this song and I hope it gives my fans some insight into my heart”.   -JB 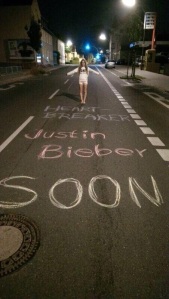 His fans have been working rigorously promoting him even more than his official team, and apparently all their hard work has paid off, as “Heartbreaker” is currently number 1 in over 56 countries on iTunes. If you have yet to hear the song, I encourage you to give it a listen, even if you aren’t a Bieber fan, as it is not his typical sound, and has truly gained respect from even some of his harshest critics.

You can listen to the song below: