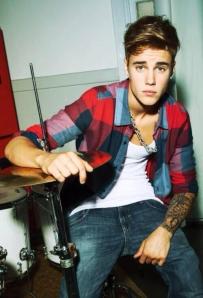 Continuing his “Music Mondays” series, Justin Bieber has released his new song “All That Matters”. The critical reception has mostly been positive, with people praising the maturity in his sound. This track, much like “Heartbreaker”, is very R&B inspired, which seems to be the direction Bieber wants to take with his music. He has always stated that he grew up listening to R&B phenomenoms, such as Boyz II Men, and that they have heavily influenced him as an artist.

Bieber has been referring to the “Music Mondays” tracks as his music journals, as they are an insight into his heart and mind. Both “All That Matters” and “Heartbreaker” have been about his inner turmoil following his break up with Selena Gomez. His latest track was released with the following statement:

“The lyrics of this song are pretty self explanatory – when you fall in love with someone, that someone can make you feel whole. I feel like anyone who has been in love knows  what I mean. The song conveys that being in love is one of the greatest feelings on earth. Love is all that matters. But the void you feel when that love goes away is gut-wrenching. I worked so hard on this song in the stuido – trying to put that feeling into music was extremely important to me. I’m happy I can share it with you.” – JB

Last week Bieber announced that for every week that his new tracks make it to number 1 that he would do “Film Fridays”, in which case he releases teasers from his upcoming film, Believe 3D. He kept his word, and did just that this past Friday, and Beliebers can look forward to that treat again as “All That Matters” is currently number 1 on iTunes in over 36 countries. Believe 3D is set to hit theaters on December 25, Christmas Day.

You can listen to “All That Matters”, and see the first teaser from Bieber’s forthcoming film below.

One thought on “Justin Bieber Releases “All That Matters””