Though it has been two years since Big K.R.I.T. last released an album (he released his debut album Live From Underground on June 5, 2012), it is clear that the hip hop artist has been keeping busy.

On top of releasing single MT . Olympus two months ago, the singer/rapper has been hard at work as it concerns is upcoming sophomore album (which will be title Cadillactica, though no release date has been announced yet) and continues to build buzz around the forthcoming effort.

To build upon that effort, Big K.R.I.T. recently rolled out his new single “Pay Attention”. The song—which was produced by Jim Jonsin—presents K.R.I.T. as a guy whose attention is caught by one special lady in the vicinity, causing him to decide that it would be wise to pay a bit more attention to her. Such feelings take shape in the song’s hook as Rico Love sings “I should be paying more attention to you” (Billboard).

Granted, even though Big K.R.I.T. has been around for a hot minute—recent album debut aside—I definitely mistook this song for a Drake song at first.

If that came off as an insult, I give zero f*cks. It was an honest comparison.

Moving on, the song is pretty good (and catchy). But don’t just take my word for it. You can check it, K.R.I.T.’s former single “MT. Olympus”, and the artwork to “Pay Attention” below (the artwork is credited to Joe Perez, who produce the artwork to Kanye West’s “DONDA”: 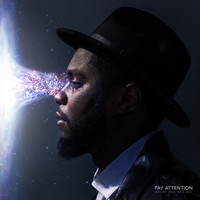 What do you think of Big K.R.I.T’s new single? Are you excited? Will you be getting his album in stores when it finally drops? Let me know in the comments below!