This is one project that I am so excited for.

I mean, it’s Daredevil, “the man without fear”; so how could I not? I can only hope that the new 13-episode Netflix series (that will be the first of many Marvel-themed shows) will do the character justice, at least more so than the the film version featuring Ben Affleck and Jennifer Garner.

While I really don’t have that much of a problem with the film, I know it could have been so much better. Instead, it managed to spawn two things: Bennifer…part 2 and the film Elektra, which is both something the entire world loathes (I dare someone to say that that movie was good) and can’t really unsee.

Every time I think about it…

The set pictures give us the first glimpse of Charlie Cox, who you may know from Boardwalk Empire–shout out to Steve Buscemi—as Matt Murdock, the lawyer and blind ninja himself. 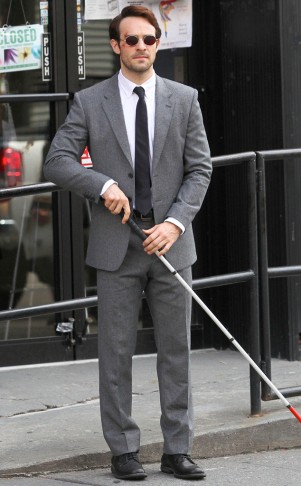 Other members of the cast are Vincent D’Onofrio as Wilson Fisk, also known as The Kingpin, with Elden Henson as Foggy Nelson. Rosario Dawson has reportedly been brought on for some unknown role.

True Blood‘s Deborah Ann Woll was the latest addition and signed on as Karen Page.

The series will be headed by Steven S. DeKnight (Spartacus and Buffy the Vampire Slayer)  and Drew Goddard of (Lost and Buffy the Vampire Slayer) notoriety. A lot is riding on the success of the series, since it is the first of many shows to be featured on Netflix (which is trying to establish itself as a television force and not just a platform for other shows, especially considering the ultimately large success of the original Netflix series Orange is the New Black). Other planned shows include series featuring Luke Cage, Iron Fist, Jessica Jones and a team-up series, The Defenders.

Marvel’s Daredevil is expected to debut in 2015