The synopsis of the film of the upcoming Lifetime Channel original biopic of actress and R&B singer, Aaliyah, has finally been revealed. Aaliyah’s tragic death came at the very height of her stardom, and left millions of fans in mourning. She has since become internationally known, and has amassed 10s of millions more fans upon her death. She inspired a nation of young girls and she showed them you can be sexy without being trashy.

At first, recording artist and Disney regular Zendaya had landed the coveted role, but due to production issues, she has since dropped out of the project.

Taking up where Zendaya left off, is actress Alexandra Shipp. She is most notable for her role as KT Rush on the show House of Anubis. 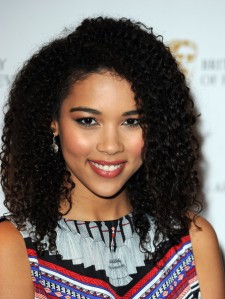 The film is largely based on the book Aaliyah: More Than a Woman by former Time Magazine employee Christopher Farley. Executive producer Debra Martin Chase gave a small snippet on what we can expect from this film:

“Aaliyah’s personal and professional relationship with R. Kelly will be explored with care in the film as we set out to depict her life with the utmost respect. Above all else, it’s our hope to inspire an entirely new generation with her music and larger-than-life talent” (Indiewire).

Here is the full synopsis of the film:

“Before Beyoncé and before Rihanna, self-proclaimed “street but sweet” Aaliyah was poised to become a global icon with top-selling albums, a hot movie career and an adoring fan base. But behind the spotlight, Brooklyn-born, Detroit-raised Aaliyah Dana Haughton struggled to succeed in a tough business while staying grounded in the midst of her growing celebrity. The film follows the beautiful and talented performer’s inspirational journey, from her debut on “Star Search” at the age of ten to the challenges she faced during her rise to become the Princess of R&B. On August 25, 2001, at the height of her popularity, her life was tragically cut short when a plane carrying the singer and some of her video crew crashed after takeoff from a Bahamian runway. Although just 22-years-old at the time of her death, Aaliyah continues to lead a legacy as Billboard’s tenth most famous R&B artist of the past 25 years and one of the recording industry’s most successful artists in history” (Indiewire).

Exploring the relationship between an adult R. Kelly (whom since then has frequently been accused of being a pedophile and child rapist) and the then 15-year-old Aaliyah?

I don’t know, EVERYTHING?

Surprisingly (or rather unsurprisingly) the family does not approve and have tried multiple times to block the film from being made.

Which is completely understandable.

However, I was shocked by what Aaliyah’s family members have been quoted saying:

“Aaliyah was more than a singer, she was – and is still – an American music icon whose legacy continues to live on and influence today’s music culture, just as Ray Charles, Notorious B.I.G., Selena and Johnny Cash,” the family said in a statement, adding, “Considering the magnitude of her fans’ affection alone, she deserves to have a tribute much more grand than a television network debut that won’t even consider the perspectives of those who were closest to Aaliyah. Disregarding the families and dishonoring the legacies of celebrated figures who have passed on, big networks want to exploit their stories for a buck. We’re here to make it clear that it’s not okay!”

This is a bit disappointing to hear from her family. Maybe I’m interpreting this quote all wrong, but are they saying she deserves a big budget production film instead of having it be produced by the Lifetime Channel? I would be more concerned with the direction this film is going in. How will they explain why and how their teenage daughter managed to get married to a much older man?

Things that make you go “hmmmm”.

Let me just say that having worked with a lot of youth programs in NYC, I had the chance to meet Aaliyah in person on three occasions. She remembered me and remembered my name upon our second meeting…which shocked me. She was one of the nicest celebrities I’ve ever met. I hope Alexandra Shipp performance really reflects the spirit of this iconic R&B legend.

Aaliyah: Princess of R&B (working title) will be filmed this summer and is to premier sometime in the fall of 2014. Find out more about the project at Shadow and Act