To me, horror is the most exciting genre of film. It has the ability to make most people laugh, cry, and most importantly, make them scream. I personally HATE the feeling of suspense these films give me. I am the kind of person who will scream before the actual “jump scare” occurs. After getting the sh*t scared out of me, I just feel powerfully elated. These movies made me bite my nails in suspense, run out of the room in sheer terror, laugh until my sides hurt, and one of them even moved me to tears.

These are the greatest horror movies I’ve ever seen. It’s not just about the ‘scariness’, but it’s about the actual quality of script writing, performances, cinematography, music, and the whole shabang!

Here are the Top 15 Horror Movies You Can’t Miss: 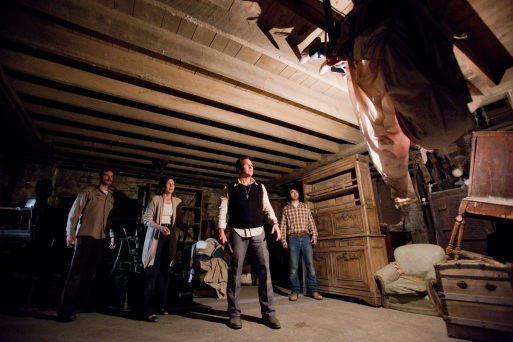 The Conjuring had everything I love about supernatural films. Demons and ghosts scare me more than anything in the horror genre. Director James Wan showed such respect for the craft, and created something so much more than ‘jump scares.’ The story is terrific, the casting is brilliant, and the fear factor made me scream my lungs out in the cinema.
14. Halloween (1978) | Directed by John Carpenter

An exquisite score, an iconic killer, the perfect protagonist, and suspense building techniques make Halloween my favourite slasher-flick of all time. I committed a sin against the cinema, and watched this film on my laptop rather than a big screen. That didn’t matter, because it still left me petrified. I had to pause the movie several times because I was just too terrified to go on.
13. You’re Next (2013) | Directed by Adam Wingard 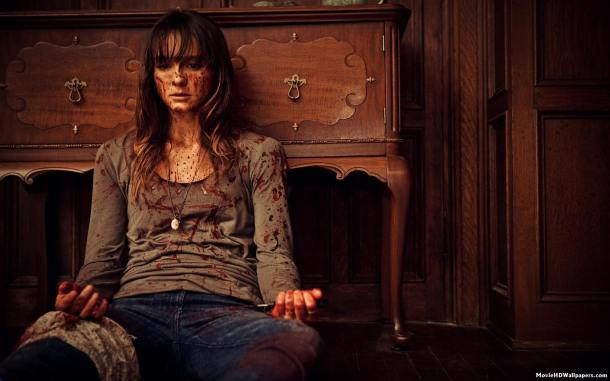 Technically, You’re Next isn’t one of the most refined horror films ever made. What makes it one of the greatest in the genre is the way it keeps on surprising you. After 34 long years, horror had finally found a female protagonist that rivals Ripley from Alien (1979). It’s one of the only films where the main character does EXACTLY what you wish they would do. That made it more exciting and enjoyable than almost any other horror film I’ve ever seen.
12. A Nightmare On Elm Street (1984) | Directed by Wes Craven

“I’m your boyfriend now, Nancy!” is the line I will never forget from this film , which was uttered when a tongue came out of the telephone and licked our protagonist in the face. This movie had sequences that will scar me for the rest of my life. The most notable one for me was when Tina went through that excruciating nightmare, being thrown about the room and reaching a climax that really tore at my chest. It’s one of the most creative horror films of all time.
11. An American Werewolf In London (1981) | Directed by John Landis

Of all the films that have been made about Werewolves, An American Werewolf In London is by far the greatest. The suspense begins just a couple of minutes into the film, and intensifies with each moment that passes. The howl of the werewolf is spine-chilling, the acting is terrific, and the soundtrack is perfect. The screenplay was a little strange, but it made the film unique. It is the transformation scene that sealed it as a horror movie legend.
10. Rosemary’s Baby (1968) | Directed by Roman Polanski 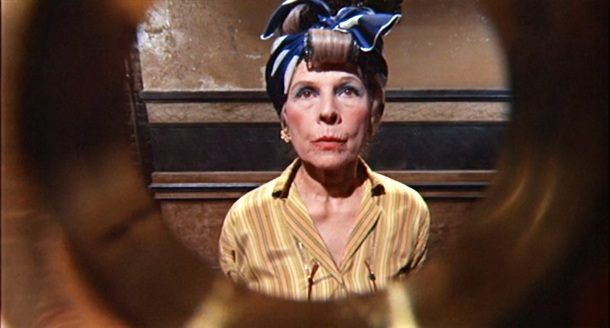 Rosemary’s Baby is one of the most daring films of its time. From demonic sex rituals, to Mia Farrow showing her boobs, it was always destined for infamy. It’s not chock-full of scares. The great thing about this film is that it terrifies you with the unknown. We don’t know what exactly is going on or how much danger Rosemary is really in. Polanski’s daring style, the unnerving music, and the terrific performances by Mia Farrow, Ruth Gordon & Sidney Blackmer is what makes this a legendary horror movie.
9. [REC] (2007) | Directed by Jaume Balaguero & Paco Plaza

While plenty of horror films have made me scream over a dozen times, I think that [REC] might hold the record for making me scream the most. It’s extremely suspenseful, and filled with jump scare after jump scare. I think the story is absolutely terrific, and the acting made it feel incredibly real. It’s my second favourite “found footage” horror film of all time.
8. The Omen (1976) | Directed by Richard Donner

“It’s all for you Damien. It’s all for you!” If someone told me that The Omen is the greatest horror movie of all time, I wouldn’t disagree with them. While it’s not my favourite, I think it’s a perfectly made film. I became very attached to the main characters, which made the stakes very high in this story. Like Rosemary’s Baby, the film’s suspense lies with “the fear of the unknown”. You can’t help but wonder, “Where did Damien come from?”
7. 28 Day’s Later (2002) | Directed by Danny Boyle 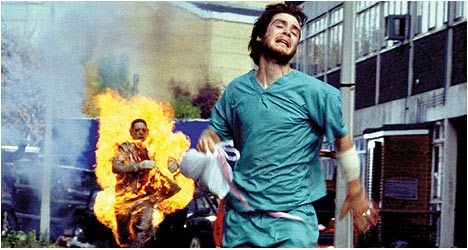 While not technically a “zombie” horror film (for it avoids that word for dear life), it follows most of the conventions that the genre entails. So, I’m just going to go out on a limb and call this my favourite zombie horror of all time. I found the story quite clever, the acting perfect, and the music to be out of this world. The scene of the protagonist walking through an abandoned London is one of the greatest sequences in modern cinema. Did I mention that the monsters infected with the ‘Rage Virus’ are insanely fast and brutally violent? That’s what makes this so damn scary.
6. The Blair Witch Project (1999) | Directed by Daniel Myrick & Eduardo Sanchez

If this movie didn’t scare you, then I understand why you would be displeased with its presence on this list. However, this movie happened to scare me half to death. I’d hazard to call it ‘the most suspenseful film of all time.’ It wasn’t the first ‘found footage’ film to be made, but I believe it’s the best. I found the acting and dialogue to be realistic enough to trick me into feeling like these events really happened. Of course, I knew beforehand that it was fake, but it still managed to petrify me with fear. It never gets old for me. After all these years, it still holds that great suspense.
5. The Ring (2002) | Directed by Gore Verbinski 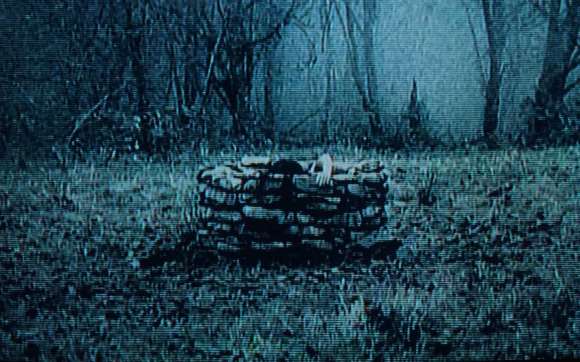 This is the only Hollywood remake that I’ve ever felt is better than the original. While Ringu (1999), directed by Hideo Nakata, is great in its own right, I felt that Gore Verbinski’s take on the story was executed in a much scarier way. Naomi Watts is a world-class actress, so they were very lucky to have someone like her to play the lead. The atmosphere of this film feels claustrophobic, as if you’re running out of time to live. There are quite a number of sequences in this film that nearly made me bite my fingers off.
4. Dark Water (2002) | Directed by Hideo Nakata

Dark Water is my favourite Japanese horror film. It goes so much further than simply trying to scare the audience. You really get to know the protagonist of this film, and feel for her situation. There’s such an emotional punch at the end too. It remains to this day, the only horror film to leave me in tears. It had one extremely scary climax, and one sequence that makes me tear up every time I think about it. Reflecting back on it, I’d call Dark Water my all time favourite horror movie.
3. Alien (1979) | Directed by Ridley Scott. (TIE)
Aliens (1986) | Directed by James Cameron 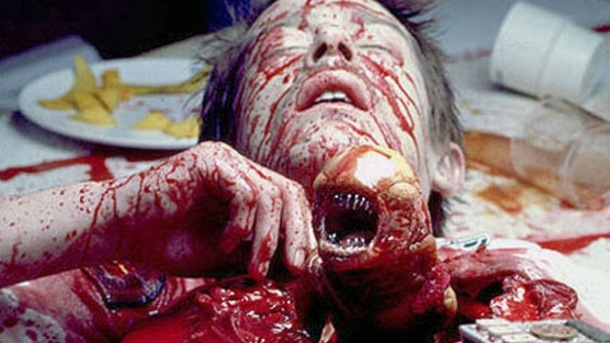 Alien (1979) is a perfectly made film. It’s meticulously cast, extremely suspenseful, and simply unforgettable. Aliens (1986), while at times cheesy, is a more epic film. It has a wide array of characters, a story with even higher stakes, and an emotional core that separates it from most horror movies. One is a better made film, the other has much greater aspects in it. Both of them scared the sh*t out of me. That’s why they are tied on 3rd place here. I’d love to know which one you think is better!
2. The Exorcist (1973) | Directed by William Friedkin

Does The Exorcist deserve the title of “The Greatest Horror Movie of All Time?” In a word, yes. I don’t find it dated at all. It’s still damn suspenseful from start to finish for me. Right off the bat, I could think of 3 iconic sequences in this film. My favourite would have to be the spider-walk down the staircase. The casting of this film was outstanding, with world class actors such as Ellen Burstyn and Max Von Sydow shining in their roles. My sister saw this film in broad daylight, and had to leave the room because the sheer terror got to her.
1. The Thing (1982) | Directed by John Carpenter

The Thing is hands down the greatest horror movie of all time for me. I could write a whole essay as to why. It immediately captures your interest through using ‘the fear of the unknown” technique. When you do know what is going on, it is revealed in arguably the most terrifying sequence captured on film (which takes place in a dog’s kennel). From then on, you’re left in constant suspense, wondering what could possibly happen next. Its story is just incredible, because it sets you up to never truly know which characters are human, and which have already become monsters. I never felt safe for one second watching this film. It has given me my fair share of nightmares. The acting, the music, the screenplay, the cinematography, and the 10/10 fear-factor makes The Thing “The Greatest Horror Movie of All Time.”
Honourable Mentions
The Evil Dead (1981), The Strangers (2008), Scream (1996), Psycho (1960), Friday the 13th (1980), Ringu (1999), Ju-on: The Grudge (2002), Evil Dead (2013), The Others (2001), The Texas Chainsaw Massacre (1974), Invasion of the Bodysnatchers (1978), Saw (2004).

The absence of “Jaws” (1975) on this list is because I consider it much more of a ‘thriller’ than ‘horror’ film.