What do I mean by fail?

Hollywood Anime/manga adaptation films have failed miserably at the box office, for a very, very long time. Among other things, casting, marketing, direction and authenticity, seem to be the tipping point between success and failure. How are the fans receiving the trailers? Are we marketing well? Is the direction sub par? All the films in this article encompassed all or some of these various aspects that lead to their failure. I will examine these ideas at length, have conducted a survey to ask anime fans how they felt about some of these adaptations, and seek to find solutions that may help in the future. The films I am highlighting in this article are: Fist of the North Star, Oldboy, Speed Racer, Dragon Ball Evolution, and Live, Die, Repeat (the film formally known as Edge of Tomorrow).

Moving on, 300 people took the survey and from this survey, fans seem to agree that casting, direction, marketing and authenticity are among the top reasons why these films fail. If you don’t believe me, view the stats 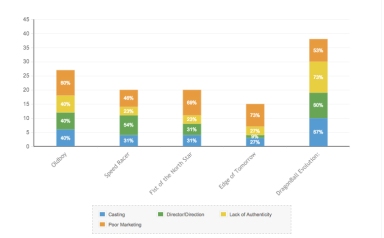 Casting (Fist of the North Star)

I think casting is the first place they almost always go wrong. Usually, executives whitewash these films, which tends to makes these types of films lack authenticity. However, that can be overlooked (it’s rare, but it happens) if the actor is good and brings a unique dynamic to the role. Unfortunately, that has not happened. Take this film for example.

Fist of the North Star is an anime classic written by Buronson and illustrated by Tetsuo Hara. Here is a synopsis of the story:

“Set in a post-apocalyptic world that has been destroyed by a nuclear war, the story centers around a warrior named Kenshiro, the successor of a deadly martial art style known as Hokuto Shinken, which gives him the ability to kill most adversaries from within through the use of the human body’s secret vital points, often resulting in an exceptionally violent and gory death. Kenshiro dedicates his life to fighting against the various ravagers who threaten the lives of the weak and innocent, as well as rival martial artists, including his own “brothers” from the same clan.”

This is Kenshiro in the manga and the animated film:

Here is Kenshiro from the Hollywood live-action adaptation:

Forget about the fact that this actor is white; what else is wrong with this? Who the hell is this? Who is Gary Daniels? Let’s be honest here: if you don’t know who the title actor is or you know a certain actor is a screw up, does that still entice you to want to see it? Granted, this movie went straight to video, but does Gary Daniels make you want to go out and buy this DVD?

Jean Claude Van Damme might make you buy it, but not Gary Daniels.

Not to discredit Daniel’s body of work. He’s an accomplished martial artist, but has never made it big in Hollywood because he can’t act. Anyway, my point is, if you’re going to cast actors whom are not lending authenticity to the story, it’s going to fail. I understand Whitewashing happens rampantly, but goodness, cast someone fans can be confident will carry the story and do it justice.

Can’t even shake my head enough.

Speed Racer is a timeless classic. Tatsuo Yoshida created the wildly popular Manga that quickly caught the gaze of the America audience, and once it reached the American silver screen, audiences could not turn away. The television series itself is an early example of anime becoming a successful franchise in the United States, spawning multiple spinoffs in both print and broadcast media. Fast forward to 2008, and this is what we get:

This is the perfect example of direction gone awry. The Wachowskis were still riding high on The Matrix fame by the time this was released. They thought they were going to capitalize off of Speed Racer nostalgia and fans were initially excited. The underlying plot is pretty simple:

Young kid who loves to race cars, is really good at it, but always runs into foes and defeats them.

Sounds easy enough to recreate for the big screen, right? Unfortunately, the direction is the film’s demise. Did they have to make this film look like a Saturday morning cartoon acid trip? No, they didn’t. But that is exactly what they did.

Maybe having one common thread could have helped make this film become more successful. Grounded in reality? Or animated maybe? This film tried to do both and failed miserably. The film was colorful and campy like the cartoon. However, I just don’t understand why it was not animated. Directors have to be careful to not go over the top. I understand with anime that is sometimes hard to do, but Speed Racer was a fairly simple concept and story. There’s nothing really over the top about it; so how they messed this up, I don’t know.

Also, what a waste of talent! I love Emilie Hursch and I like the Wachoswkis’ work. This just didn’t come together how it could have.

“The story begins with Goku, who seeks out upon his adoptive grandfather Grandpa Gohan’s dying request to find the great Master Roshi and gather all seven Dragon Balls. Of which he has one, in order to prevent the evil Lord Piccolo from succeeding in his desire to use the Dragon Balls to take over the world. And Goku’s quest is to obtain the mystical Dragonballs before Piccolo does”

Don’t get me wrong; I have seen some horrendous anime adaptations from Japan as well. What sets those films apart is the level of authenticity. Dragonball Evolution comes to mind when I think of authenticity.

Or, you know, lack there of.

I mean, good God! Besides this poster looking like it was fan made, what about this poster looks authentic? For starters, when you hear the name Dragon Ball, you think of Goku.

He’s tall, strong, and powerful. He looks like someone that can wreck sh*t.

When I think of Goku in the awful live action adaptation, I think of this:

The look and authenticity is completely lost on the most important character of the series. I understand that no one really looks like the animated version of Goku, but there are ways of pulling it off…ways in which they didn’t even bother trying.

On the flip side, maybe a story about an Alien monkey boy coming to Earth wouldn’t have necessarily worked, but if this isn’t one of the lamest origin stories. This is why these adaptations are so difficult. Many of these stories are not meant to be grounded in reality. Some of these stories just aren’t meant to be translated any other way but by animation. However, respect for the source material can and will go a long way. Fans are so invested in some of these stories, it’s possible they see no point in viewing a movie that has nothing to do with the story they are use to.

It’s OLDBOY! Everyone loves the 2007 version from Korea. That means everyone will love this one! The name will sell itself, right?!

First of all, I’m sure many of you are surprised to learn this was originally a Japanese Manga written by Garon Tsuchiya and illustrated by Nobuaki Minegishi. See, here is a case where you have a good actor (Josh Brolin), decent director (Spike Lee), and what seemed like a hearty budget for this film. Also, it is almost a scene for scene adaptation from the 2007 version of Oldboy; so, why didn’t people want to see this?

Not only did folks not want to see this, but it also went down in history as one of the most abysmal box office failures ever. I believe the blame for that failure goes to the marketing department. I saw a few posters and almost no trailers at the theaters for Oldboy in 2013. In addition to that, I wasn’t sure what audience Spike Lee was trying to target. An indie crowd, a blockbuster crowd, I couldn’t tell and neither could anyone else. So what do people do when they want to avoid confusion?

Well, they simply move on…

Edge of Tomorrow (adapted from the Manga All You Need Is Kill by Hiroshi Sakurazaka) suffered a similar fate due to a poor marketing campaign.

Despite this film being unauthentic, deviating from the original Manga storyline, and proving Tom Cruise is no longer a box office draw, this somehow manages to be a great film. Maybe the title Edge of Tomorrow killed fan interest (otherwise known as Live, Die, Repeat). Or possibly the way the synopsis is worded:

“The film takes place in the near future, where an alien race has invaded the Earth and defeated the world’s military units. It follows Major William Cage (Cruise), a military PR officer inexperienced in combat, who is deployed into a combat mission against the aliens. Though Cage is killed in minutes, he finds himself starting over in a time loop, repeating the same mission and being killed. Each time, Cage learns to better fight the aliens, and he teams up with Special Forces warrior Rita Vrataski (Blunt) to defeat them.”

In hindsight, I guess this synopsis doesn’t sound all that appealing. Actually, it sounds pretty stupid. And that’s too bad because the film is really enjoyable. Maybe things will pick up on the DVD side, and it will be seen as a cult classic.

I guess time will tell.

As you can see, these films have truly suffered dearly. Too many film fails can make a film irredeemable. Fans are in fear of their favorite animes and characters getting bastardized by Hollywood. But there has to be a better way! I present the following solutions:

1. If directors stuck with source material, that would help. I am not saying stick to it 100% because I understand there are some changes that are unavoidable, but a 360 degree overhaul isn’t necessary either.

2. Also getting the authors, and illustrators of the original Manga or anime involved in some capacity, even as an advisor, could help lend a hand as far as authenticity. Knowing that the author had something to do with the making of a film can assure fans they will see what they expect to see. Better scripts can lead to slightly better actors which may elicit a fairer box office draw so the film isn’t a complete flop.

3. Lastly, make marketing a team effort. Reach out to fans! Yes, anime watchers are a small population of movie goers, but could make a difference in terms of money making potential. In addition, if the fans love the adaptation, word of mouth can accelerate ticket sales. This tactic has worked for so many genres of film; I am sure it could work for these adaptations as well.

All of this, in the end, rests on Hollywood’s shoulders. They assume that films meant for a small population of moviegoers (those who watch anime) can appeal to a wider audience if they completely change the source material. But no, what they have done is isolate a core fan base and leave the general audience bored and uninterested

And so, FAILURE is the result.

Hollywood should know better and do better.