Yes, I know that Gravity Falls is an animated series aimed at children that airs on Disney XD… and I am nowhere near that age.

Believe me, I still yearn for the days when this version didn’t exist and in its place was Toon Disney. I remember staying up way passed my bedtime for a shot of watching Gargoyles and Darkwing Duck without getting stomped in by my mom.

Hell, I miss the 90’s when shows on TV were generally good and VHS tapes were still orange. I still live in this place inside my mind you guys, because I refuse to let it go.

*Side note: ‘Saturday Cartoons’ are no longer a thing since the CW ended it’s Saturday morning cartoon block, The Vortexx, last week. Granted the shows were…not what they should have been, but it’s the principle.

Does anyone besides me remember ‘One Saturday Morning’?

The only reason I woke up at 8 am on a Saturday.

Even though Gravity Falls is a fairly recent show, it reminds me of a time when Disney was actually good. The episodes have set arcs and an order and yet if you just happened to watch it out of order, it doesn’t create a large problem. The writing is funny and creative and it should be noted that it is entertaining on both ends. There are plenty of inside jokes without being just thrown in there to please older viewers.

Here is the overview as per Wikipedia…because that’s where the truest information seems to live:

For their summer vacation, 12-year-old twins Dipper and Mabel Pines are dropped off from their home in Piedmont, California to the fictitious town of Gravity Falls, Oregon to live with their Great Uncle Stan (often shortened to Grunkle Stan). Things are not what they seem in this small town, and with the help of a mysterious journal Dipper finds in the forest they realize that their everyday lifestyle has changed. With appearances from Wendy, Dipper’s crush; Soos, friend of Dipper and Mabel and handyman to Grunkle Stan; plus an assortment of other characters, Dipper and Mabel always have an intriguing day to look forward to.

Series creator, Alex Hirsch was inspired by his own childhood experiences with his twin sister during their summer vacations.

Hot damn, I wish my really sad and boring summers were a fraction of how awesome the Pines’ summer is in Gravity Falls.

How could I not?

I will admit that when my seven-year old-brother recommended watching it, I was… skeptical. What could Disney possibly have to offer to me at this point? And the paranormal/supernatural adventure genre I feel has been burned out lately. But during a half-assed baby-sitting stint, I watched it and surprisingly found myself enjoying it.

The show has so many great things going for it. It has mysteries that span the entire series, which Dipper (voiced by Jason Ritter) tries to uncover with the help of a mysterious book that is capable of unraveling all of the secrets in their small town and the help of his overly excitable and outgoing sister Mabel–voiced by ‎Kristen Schaal. They are assisted by some other residents in Gravity Falls as well. The show is known for its many riddles, codes, and ciphers (All of which the viewer can decipher). The messages usually reference the episode or are part of the larger mystery: who is the author of the journals?

All of the puzzles

I love it when an animated television series can make me think. It’s far too often that we check completely out and bring out our best Patrick Star face and become a rather large lump on the couch with nothing really registering except the pretty colors.

Of course, wherever there is a mystery, there will be theories. And there are a lot of them. An

d they vary, ranging from numbers to letters. I usually don’t take the time to figure them all out because I am way too lazy for that. But, I am ultra invested in finding out all of the secrets the show has to offer. Especially where Grunkle Stan, Bill Cipher, and the author of the journals are concerned.

But enough about that; that subject requires its own post. Another selling point are the characters. There are a lot of townies but everyone has there own individual personality. For a show with only two seasons under its belt, we know a lot about some characters and for some, we’ve only scratched the surface. For example, we know that Grunkle Stan has a lot of secrets and that Dipper isn’t exactly his standard of “normal” (but then, who is?).

There was an entire episode that is one of, if not my favorite, episodes called “Dipper vs. Manliness”. Dipper embarks on a quest to become more of a man, which is spurred on by his lack of chest hair and his love of Icelandic pop group BABBA’s ‘Disco Girl’. Dipper learns that there is more than one set way to be “manly”. And in ‘Dreamscapers’, Stan’s secrets–the fact that he hides his arrest warrants under the rug in the Mystery Shack–and his apparent dislike of Dipper is highlighted.

Gravity Falls tackles some pretty outlandish and fantastical things–similar to Regular Show and Adventure Time–like a friggin’ ‘Manitaur’ and ‘Multi-bear’ for example. And then we end up with stuff like this:

However, unlike Regular Show that is constantly adding crazy, nonsensical elements like the ‘Night Owl’ that appear for only one single episode, Gravity Falls instead relies on a complex system of foreshadowing and callbacks that, in retrospect, seem to have been firmly in place since the show’s inception. Some examples of this are the forest gnomes that have shown up multiple times in different episodes and the woodpeckers that are almost constantly in the background of the establishing shots. The woodpeckers turned out to be a proper plot device in the episode “Irrational Treasure.”

Then, there was the case of Blendin Blandin. Blandin, a previously unexplained background character that inexplicably popped up in various pivotal scenes, turned out to be a Time Anomaly Removal Agent attempting to eliminate in-show paradoxes. I wasn’t exactly surprised, but I was no less impressed with the series.

Aside from that, the biggest evidence are the journals themselves. Initially, we are lead to believe the journal Dipper finds in the pilot was the only on of its kind. Then in “The Hand That Rocks The Mabel”, it was revealed that Dipper’s journal isn’t the only one, causing the mystery over the origin of the books to deepen.

*Since I don’t have neither the time nor the patience to sit here and go over every theory that has been spawned from the show. That is for another article. If you want to see those you can check the internet…or Tumblr. 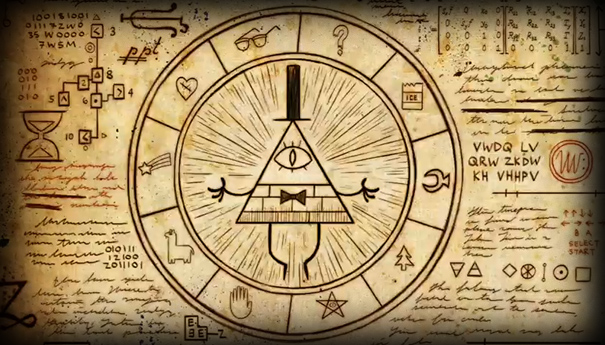 Despite all of the stuff that has been revealed to the viewer, through foreshadowing or legitimate revelations, we really don’t know anything about the larger mystery at hand. Hell, there are characters that we aren’t really sure about.

Then there are some other characters that have yet to be really elaborated on, like Bill Cipher.

We may not know much about Bill, but we do know that he seems to have had some past history with Grunkle Stan because he remembered him. This is at odds with what we initially know about Stan…that he doesn’t f*ck with the supernatural. Could Bill be the reason why?

And who is really the the author of the journals?

I guess we won’t know until its been revealed to us.

Will the gang ever find out the truth about Bill Cipher and the journals? Will Wendy and Dipper ever end up together? Will Mabel ever stop being so damned overly excitable? Find out the next time on DRAGON BALL Z.

What do you think of Gravity Falls? Leave your comments below!