I have to say: it is a GREAT time to be a comic book fan, especially if you are into superheroes.

We’re probably going to be seeing superhero films and TV shows until we’re 85 or something.

Nevertheless, there still exist an array of heroes that have escaped the renewed exposure that superheroes are getting nowadays.

So, without further ado, I present to you part one (yeah, this is one of those) of six superheroes that are underrated:

Introduced way back in the Bronze Age, he kind of became a hero by complete accident. He was intended by the powers that be at Marvel to be as scary as monster, but he turned out technically being the opposite.

Beta Ray Bill is literally a man of the people (well, not so much a man, but you get what I’m saying). When his people–the Korbinites–almost get wiped out due to their home planet shattering, he assumes the role of their defender, vowing to protect them. This vow brings Bill directly to Thor down the line when Odin mistakes Bill as Thor because of his worthiness. This eventually leads the two characters to battle over possession of Mjölnir (and Thor’s powers by extension), which basically ends up being a stand still.

Nope, not at all. He’s that badass.

Bill is one of the few Marvel characters outside of Marvel’s altered Norse mythology to be deemed worthy enough to wield Mjölnir. But obviously, because Thor needs his hammer, Odin deems it appropriate to grant Bill his own: the Stormbreaker. He also maintains his status as a close ally of Thor’s.

Other than that, I would love to see him show up in a Thor or even Guardians of the Galaxy film at one point.

I was introduced to Moon Knight a couple of years back through the following line:

See, that’s saying a lot as Batman is already, basically schizophrenic. So, what they meant to say is that Moon Knight is super schizophrenic Batman.

Originally from Chitown, Marc Spector is guy who was aspiring to be a boxer, a mercenary, and a U.S. Marine (I’m not sure how he was supposed to do all three of these, but I digress). Eventually, he gets pulled into some archaeology excavation while working for an African mercenary and while on this excavation, he and his team discover a time-worn temple of Egyptian moon god Khonshu. With ancient artifacts and riches hanging in the balance, the excavation ends up going haywire. Betrayal happens, people die, and Spector is left for dead near the temple.

Eventually, neighboring Egyptians end up saving his life by delivering him to their temple, which is where he ends up meeting Khonshu face-to-face while unconscious. Khonshu promises to hook Spector up with a renewed life-force if he becomes his avatar. Since he wasn’t about to argue with a god, Spector agrees and dons the silver veil of Khonshu.

So, my earlier statement of Moon Knight being schizophrenic is actually incorrect. The correct thing to say is that he has dissociative identity order. Whereas Bruce Wayne has the standard Bruce/Batman egos to deal with, Moon Knight over here is sporting four of them. They are as listed:

– Moon Knight: Your standard avatar of Khonshu and all-related vengeance.

– Jake Lockley: Your standard taxi cab driver. It’s hard keeping tabs on the criminal underworld as a part of the 1%; so, this is how he remedies that.

Granted, all of the above makes me automatically say that he is doing the utmost (I mean, where does he find the time?). That being said, it’s kind of cool (although, I wish Marvel would do more with it).

On top of that, I find it super interesting that unlike Batman, Moon Knight is more pre-occupied with vengeance as a notion and not as a personal vendetta. I figure that that is what usually gets Bruce into an insane amount of trouble (not to say that Moon Knight doesn’t get into his own sh*t as well).

Hailing for LA, Heather Douglas’s eventual destiny as Moondragon was shoved upon her when her parents were out right killed by Thanos for accidentally happening upon one of his ships in the desert (yeah, he’s that mean). Douglas escapes being killed and is discovered by Thanos’ dad—Mentor—and taken to his home planet where she is raised by monks.

With time, these monks help Douglas bring her body to peak physical condition and also help her unlock her dormant psionic abilities—which are apparently present in all humans (what is this, Dragon Ball Z? So, we all have psionic abilities on top of chi? Clearly, I’m behind. I should at least be able to fly are some sh*t). Douglas’s mental powers become so vast that she up and decides one day to contact a cosmic entity known as the Dragon of the Moon. Said entity wants to take over her body, but Douglas decides against it and fights it off. Because of this victory, Douglas eventually takes on the name Moon Dragon (which a. turns out to be very sacrilegious according to the monks and b. is clearly ironic).

As if it isn’t enough that she defeated a cosmic entity with her f*cking mind, another testament to Moondragon’s immense mental abilities is the fact that she was able to mentally control an entire planet and command them to do what she said/wanted.

Moondragon is also cool in that she’s Drax’s kid (that’s right. Drax aka Arthur Douglas, is in fact the father of Moondragon aka Heather Douglas). But that shouldn’t be too surprising, seeing as it is common for one badass to bring another badass into the world (that being said, their story is all butterflies and badassery. Some can even say that it ends badly).

Is there anything else to say to that? I think not.

On top of that, Moondragon is openly bisexual and has been linked to the likes of people like Phyla-Vell, Thor (that’s a looooong story), Marlo Chandler, and Daredevil.

If she doesn’t make a brief appearance in some Guardians of the Galaxy film (or gets a brief nod), I will be super annoyed

Formerly an Olympic Gold-medal winning athlete (f*ck yeah!), Jefferson Pierce’s path to superherodom starts out as a reluctant one.

After his gold medal-winning pursuits, Pierce and his family return to the Southside of Metropolis (why does the southside of anything always sound awful? But again, I digress), where he takes on a job as a high school principal. Upon returning, Pierce discovers that the Southside is over-run with crooked political leaders, crime rings, shady businessmen and the like.

Pierce refrains from utilizing his repressed metahuman abilities for the sake of the neighborhood until one of his most promising students is murdered in the most public of ways. After this tragic event, he adopts the moniker of Black Lightning.

Black Lightning carries the distinction of being one of DC’s first black superheroes. This is such a huge deal that Black Lightning himself comments on this in reference to his moniker. Apparently, he called himself Black Lightning because he “was the only one of us around” during that time and he “wanted to make sure everyone knew exactly who they were dealing with” (Infinite Crisis #6).

Namorita’s origin story is a complicated one, but I’ll try to sum it up as best as I can:

Born to Namora, the first cousin of Namor, Namorita is actually a clone of her mother. This came about when Namora’s husband, Talan, was frustrated with Namora’s barrenness. Frustrated, but ready to take matters into her own hands, Namora requested the help of an exiled scientist, Vyrra. Ironically, Vyrra had been banished for his (outlawed) cloning practices and that is exactly what Namora needed help with.

And thus Namorita was born (although her mother never told her she was a clone before she died and her father, Talan, also died shortly after her birth…which, you know, is kind of awkward).

Despite her depressing ass back-story (oh, yes, it gets worse, people), she perseveres. While attending school at Empire State University years later, she becomes a part of the New Warriors and would later go on to assist people like Nova and Thor. She also defeats longtime Fantastic Four foe—Terrax—in battle during her early days as a New Warrior.

Basically, Namorita is one of those character’s whose life is always thisclose to falling to sh*t, but ultimately never does because of her tenacity.

Also, let’s be real: being related to Namor in anyway is a plus in my book.

And last but not least, we have Katma Tui.

People are always arguing about whether or not John Stewart, Hal Jordan, and such are the better Lanterns, but I move to insert the badass Katma Tui into that conversation.

BUT ARE YOU THOUGH? I DON’T THINK YOU ARE.

Coming from the planet Korugar—which is basically next to the planet Oa (the same planet that keeps the Green Lantern corps in check), Katma Tui is not someone to be taken lightly. On one of her first outings as a green lantern, Tui and Korugaran scientist Imi Kann take out a giant space amoeba that threatens her home planet (she is fiercely protective of her home planet). She later goes on to become a model Green Lantern. 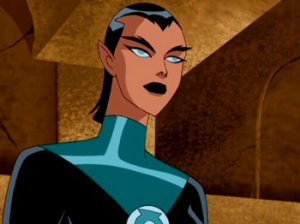 Going back to the fact that she is fiercely protective of her home planet, it turns out that Sinestro is also from the same planet. And eventually, when Sinestro attempts to abuse his Green Lantern powers and enslave Korugar, Tui goes apesh*t and leads an uprising against him. To add insult upon injury, she eventually testifies against him when he has to answer for his actions before the Guardians.

Personally, my favorite iteration of Katma Tui is the Justice League animated series. In the series (particularly, the episode “Hearts and Minds”), she functions as the chief trainer of recently recruited Lanterns and it is revealed that she trained John Stewart (and it is hinted at that they were briefly a thing versus being married in the comics). I highly recommend checking the episode out.

What say you, lovers of the zoo? Who are your favorite, underrated heroes? Who do you think deserves a spot on part two of this list? Let me know in the comments below.

3 thoughts on “6 Superheroes That Are Underrated”