A couple of days ago, I was sitting around with like-minded, comic-oriented friends. While this was happening, someone proposed a question to the group:

What is the worst comic book event that you ever had the displeasure of reading?

Me being a Marvel stan, I instantly scanned my mind for less-than-stellar comic book events that I had read over recently. Someone mentioned Civil War and while I had my qualms with it, I had to disagree. Civil War was pretty rough in some places, but overall it had some really great ideas, even if it didn’t always execute them well.

So I continued to scan my mind until I finally arrived at my answer: Avengers vs X-Men.

Yes, Lovers of the Zoo, I hated the shit out of AvX for a variety of reasons. Even prior to it being rolled out, I vetoed because I thought it couldn’t possibly be a good idea.

Lo and behold, I was right.

So, without further ado, I present to you nine reasons why I hated AvX:

1. As I predicted, there was no proper justification for this colossal fight between heroes.

Seasoned comic book fans will know that it’s very hard to come up with a viable reason as to why all our favorite heroes are fighting. Indeed, writers tried with Marvel’s famous/infamous (it depends on who you ask really) Civil War and to this very DAY, people still have mixed feelings about it (I myself think certain characters were done well and others were completely squandered, but I digress).

AvX proved to be no exception, but it left even more people scratching their heads than Civil War did. Like, besides some vague idea that the Phoenix force was dangerous and that no one should have control of it (ESPECIALLY if they have any connection with the Grey-Summers clan), no one I asked could figure out why the X-Men and the Avengers were fighting.

2. Trying to “Kill” The Phoenix Force was not even remotely an intelligent idea.

You know that look you give cops in superhero movies/shows when they try to shoot a superhero or supervillain and then are somehow shocked that the bullets bounce off them or go through them or etc, etc?

Well, that’s the look I gave Tony’s obtuse ass when he tried to “kill” the Phoenix.

Seriously. Because no one (mostly the Avengers) wanted the Phoenix Force around and because they certainly couldn’t stand by and let the X-Men have it (even though it was VERY unclear is to why the Phoenix Force was dangerous, seeing as it was inconsistently characterized for the ENTIRE arc), Tony HAD to try to kill it. He HAD to try and kill a GOD-force.

And because that is as dumb as it sounds, it ultimately failed and instead of taking form in ONE host (usually Jean), it took form in FIVE hosts, as it had been split up due to Tony’s shenanigans. These hosts were Namor, Magik, Cyclops, Colossus, and Emma Frost.

No, this will NOT end well.

Because the universe has this “there can only be one” rule going on, Cyclops comes outta nowhere to steal everyone’s power for himself and become the one true phoenix (I’m gonna resist the urge to abbreviate at that to OTP).

In all honesty, that should have been a pretty newsworthy twist. The comic book world at large knows that Cyclops is very much a boy scout—much like Superman or even Cap to a certain degree—and his adventures on the dark side should have been a series of comic book runs to remember. But alas. It was not.

Instead, we got a lot of angst and while angst is not necessarily bad, said angst didn’t even really touch on anything besides his Jean-related problems. This was disappointing because his whole penchant to try to “do the right thing” could have provided for some much-needed reflection and story fodder.

Granted, having Cyclops being the one to deliver the killer blow SHOULD HAVE (once again) made for an exciting ass story, but it was essentially chalked up to “Hey, the Phoenix force makes us do the darndest things; so whatevs”.

I’d think that Cyclops would have carried a shit-ton of resentment towards Xavier and having to be his “golden boy” all of these years. I feel like he would resent Xavier and some of his more unsavory decisions (re: The Danger Room). I feel like he would resent him for having to clean up his messes a lot of the time and bear the brunt of whatever criticism that should have been leveled at Xavier.

Instead, we get “The Phoenix Force Is Bad” defense and “Absolute Power Corrupts Absolutely” defense and any and all potential for a nuanced story-line between these two is lost. There was an attempt with Scott going all “you’re not my real dad” to Xavier, but then it was abandoned completely.

5. The Avengers attacked the X-Men over the Phoenix Force EVEN WHEN THEY USED IT FOR GOOD.

As I mentioned before, no one has common sense or even so-so decency in this event and this especially pertains to the Avengers. The grossest example of this—other than trying to kill the Phoenix Force—is the fact that the Avengers refused to leave the X-Men and the Phoenix Force alone, even when it was clear that they were DOING GOOD.

For instance, Scott and company literally solve world hunger, develop clean and FREE energy, and distribute clean and FREE water for all. But you know, instead of the Avengers focusing on that and helping the X-Men to sustain it, they go all “no one man should have all that power” on them and decided that they HAD to fight.

And that’s when Scott decided to go AWOL and all the shit hit the fan.

6. Related: some of these match-ups were just wrong. 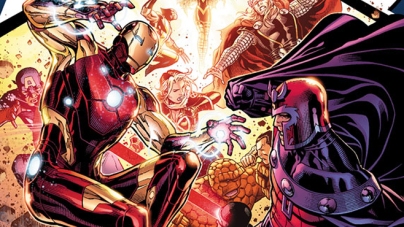 This whole event was so extra and its match-ups were no exception. Rock Hard Thing vs. Atlantean Namor (Whet?) The Limbo-Ruling Magik vs super-spy Black Widow (Whet??). The stupendously powerful telepath Emma Frost vs God of Thunder Thor (Whet???)

Indeed, some of these match-ups made me wanna bang my head against the wall. But nothing, NOTHING ALL, could have prepared me for the foolishness that was the match-up between Iron Man and—*wait for it*—Magneto.

You are telling me that Iron Man, (as in the man of IRON, as in FE the ELEMENT IRON, as in a dude with a METAL suit) was able to go TOE-TO-TOE (and later WIN, fluke or not) against Magento, controller of magnetic fields and manipulator of nonferrous and ferrous metals and master of shade and no f*cks given???

It completely boggled my mind, y’all. And that was the point at which I knew this story was bollocks, but because I hate myself somehow, I kept reading. Which brings me to my next question: 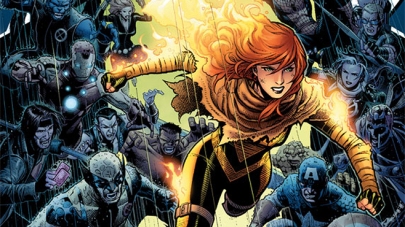 I’m going to be completely honest with you: I don’t know how to summarize Hope Summers and the AvX event did not help. Obviously, her being part of the Grey-Summers clan tells me that she is a force to be reckoned with, but AvXdidn’t tell me much else and it didn’t really try either.

Was she a villain? Unclear.

Was she primed to be the savior for all mutants and thus a quintessential messiah-figure of X-Men? Kind of, but still unclear.

Was it ever explained *why* exactly she had to be the new avatar for the Phoenix Force or why she was qualified to be said avatar? Not really, but it’s okay because that apparently doesn’t matter.

8. This whole “Scarlet Witch will undo everything with her OP powers if we f*ck it up” trope is tired. 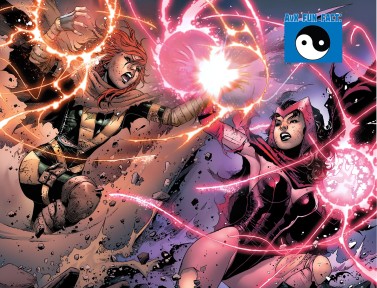 Look, I like Scarlet Witch, but not everyone else does and here’s why. She’s a hot mess because she and her power-set are often written inconsistently and The Avengers: Age of Ultron didn’t really do her any favors by basically re-writing her as a more “troubled”, alternate universe version of Jean Grey.

Still, she has her good moments after she deflects from the Brotherhood of Mutants earlier in her publication history and links up with her bae Vision and her kids Wiccan and Speed (that’s a long story, but I digress). Unfortunately, because said kids were essentially a product of a shady ass deal with Mephisto (when are people gonna stop making deals with this dude???), that didn’t necessarily end well.

And that ending is what comic book fans now infamously call M-Day. Most even refuse to talk about it…mostly because it featured Scarlet Witch acting as some sort of Deus Ex Machina and screwing up everyone else’s lives as a result.

Unfortunately, Scarlet Witch serves a similar-ish purpose here in that she is brought in toward the end of the event to undo some of the most terrible sh*t that happens. And you know, even though I’m pretty ambivalent about do-overs due to time-mumbo-jumbo, I get really annoyed when these superheroes are not allowed to live with the consequences of their actions. This happens more times than people would like to admit, especially considering the looong publication history of some of these caped crusaders.

9. How did an event that was worked on by comic book vets turn out this badly? 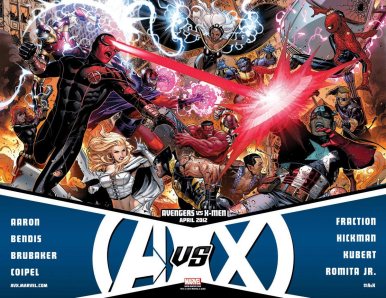 THE Brian Michael Bendis, Matt Fraction, and Ed Brubaker worked on this event.

And it came out lookin’ like…this.

I have no idea.

While I’m still mad at the latter for his haphazard handling of Iceman’s “coming out” story (re: what the hell is “full gay” and how the hell doesn’t that feed into bi-erasure?), all three of those writers, in particular, have given us some of our best Marvel stories. Bendis with Daredevil and Ultimate Spider-Man. Matt Fraction with his fantastic Hawkeye and Iron Fist runs. And Ed Brubaker with Captain America and Bucky/The Winter Soldier. Like, I’m only naming these guys’ more popular works, but if I were to bring out their entire bodies of work, I’d be here ALL day.

So again, that begs the question: why wasn’t AvX better? Should it’s lackluster-ness be credited to “too many cooks” syndrome or is there more to it?

Granted, I’d like to find out but I might never know, mostly because I have no plans on ever reading these series of comics again.

What say you, lovers of the Zoo? What was your least favorite thing about AvX? Let me know in the comments below!

One thought on “9 Reasons I Hated Avengers vs X-Men”