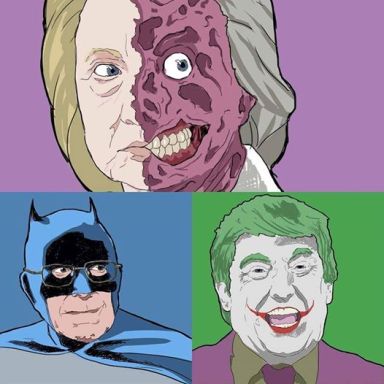 About this meme. This humorously, but woefully incorrect meme.

Here’s the thing: usually us Zookeepers try to stay out of anything blatantly political (unless you count celebrating the Blackity Blackness™ of this site). But, as of very recently, I have deemed that virtually impossible to do and have decided to throw my hat in the ring when it comes to discussing this stuff.

What am I talking about?

Well, I’ve found that something that I once really enjoyed–memes–has become pretty corrupt and convoluted this election cycle due in part to one politician: Bernie Sanders.

Now before Bernie Bros™ come at my neck of taking potshots at your savior, let me be the first to say that the blame does not solely rest upon his messianic shoulders (can you hear the sarcasm?). Hillary, on one hand, has been the hottest of messes this cycle, attempting to be that one hip grandma that wears snapbacks, Chicago Bulls jerseys, and says “yo!” a lot in the form of pandering–horribly I might add–to voters that happen to be Black or Latinx. Ol’ Orange Boy Trump™ has turned the election into a sideshow while channeling his inner Adolf Hitler. And then, somehow, someone let the Zodiac Killer run for president.

Because that is just a fantastic ass idea.

Who is responsible for this nonsense?

That said, I’ve found that most of my ire has been directed at Bernie this election cycle. Not because he’s particularly awful (although his ’94 crime bill involvement, his comments on reparations, and many other things haven’t helped his case with me), but because his stans–Bernie Bros™–are convinced that they are always right and will talk down and condescend to anyone who disagrees with them. This is at roughly the same rate as Hillary Stans–aka White Feminists™.

Now, I was initially able to block out this ChetBeckery™ and this Chet™ Noise, but the incorporation of Hillary and Bernie into prominent memes forced my hands. Memes like the “Bernie or Hillary?” meme and the #BernieWasThere memes particularly come to mind.

In the “Bernie or Hillary?” meme, pop culture references–among other things–were taken and applied to these politicians in a “versus” manner. Now, because Hillary is the painfully un-hip-but-wannabe-hip grandma in this election, she would usually interpret these references in too literal a manner or interpret it as such that it either didn’t make sense or displayed her gross obliviousness.

On Bernie’s side, he usually gave the culturally correct and humorous answer. I think the most memorable of these is when the topic was “First Things First” and both candidates “answered” with hip hop lines/references that hip hop heads and aficionados were bound to remember/make connections with:

I admit this was hilarious.

Obviously, I myself found these things memes funny. Initially. But then, they overstayed their welcome to the point that I started to scroll past them every time I saw them.

Still, nothing could prepare me for my annoyance at the factors that resulted in the creation of the #BernieWasThere memes.

As you will recall, I mentioned that Bernie stans have a tendency to talk down to people they don’t agree with/who don’t agree with them. Welp, let’s just say that Black folx–specifically those on Black Twitter–are overly familiar with this phenomenon.

After events like the BLM interruption of Bernie, the Bernie Bro’s gross tag of #MississippiBerning, and after numerous Bernie stans insinuated that Bernie was losing out on winning primaries in Southern states chiefly because of Black Folx (and, you know, not because Bernie didn’t put in enough work campaigning in these states. Nah. It’s all Tyrone and Shanice’s fault), Black Twitter clapped back at it ALL–on multiple occasions–with multiple tags…with most memorable of these tags including #BernieSoBlack and #BernieWasThere.

#BernieWasThere, initially spearheaded by The Daily Show and reignited this week by Black Twitter, produced loads of hilarious memes that stemmed from Bernie stans constantly bringing up the fact that because Bernie was involved in the Civil Rights Movement, any criticism of him–specifically from Black folx–was invalid.

So, in reply to that type of nonsense, the brilliant denizens of Black Twitter and other places photoshopped Bernie into numerous historical happenings, stating that “hey! Bernie was obviously there”.

I know what you’re thinking now.

“Lex, if those memes are so funny, why are you pressed?”

Well, dearest lovers of the Zoo, it’s pretty simple: while they are humorous, I am tired of these memes. Over it. Burned ou–excuse me, #BernedOut.

Part of it has to do with the fact that any criticism of Bernie is perceived as a gross slight since he has been propped up by his loyal stans as some sort of martyr or Messiah. I mean, besides being annoyed with the Western conflation that criticism = hate, I am also just annoyed because there are legitimate things to criticize him (and Hillary too–for you folx who conflate warranted criticism with auto-sexism/anti-feminism) for.

Case in point, I like his plan for free college because I am a broke college student. That said, based on his economic plan, how in THEE FUQ does he think he’s gonna pay for all that? Especially since we know Congress is the Anti-Christ and that concessions will quite possibly have to be made in the quest to pass all that shit?

How I imagine this “plan”, so to speak.

But, of course, the stans won’t hear me because they’re too busy propping him up as the quintessential savior of this election cycle.

Which brings me full circle back to the ridiculous meme we started with.

I was initially going to leave this alone as I’ve done with many election cycle memes at this point, but something about seeing Bernie portrayed as Batman made me snap.

You see, I almost protested seeing Bernie being positioned as Batman. I never thought of Bernie as the caped crusader or vengeance or being “The Night”. However, when I remembered that not only does Batman love to dump on the mentally ill (something Bernie has done consistently during this election) and not only does he not have any real solutions for them, but he also has had quite the tough time trying to grasp issues that are systematic in nature (specifically racism), I thought, “Eh. Proceed”.

In fact, the only moment I remember Batman trying to tackle something like that was very recently in the Batman comic #44 where Batman/Bruce Wayne was forced to confront systematic racism in the face through the murder of a Black teenager–in a hoodie–at the hands of a White police officer and be 100 about how he contributed to it as a 1 percenter.

This is why I specifically always preferred Oliver Queen–the Green Arrow–to Batman. Say what you want about all his whacky arrowheads and fixtures and what not, but prior to his Batman-Lite days on the CW, Queen somewhat understood issues of systematic inequality and racism. His methods for tackling them weren’t perfect (there was a particularly questionable, but HOPEFUL comic book run where he and Hal Jordan literally ran around taking up social justice causes in the ‘70s–prior to the emergence of John Stewart), but one of his earliest outings included him punching 1 percenters in the face (including family members) rather than scapegoating low-level crooks, mentally ill folx and victims of circumstance like Batman does.

And of course, Bernie’s portrayal of Batman isn’t the only thing I have issues with. Sure, I think Hillary’s set up as Two-Face is quite, quite APT. She flip-flops on everything and anything. And you know, if I am to be benevolent and give her the benefit of the doubt, I will assume that maybe, just maybe, she entered politics to do some “good”–doubt it–but ended up getting her hands red and bloody just like her male compatriots. Just ask Honduras, Haiti, and Black people here in this country. So she’s similar to Harvey Dent in the same way that Dent tried to do some good in a fucked system and ended up becoming the system itself.

But as for Donald Trump? Man, oh, man. Let me count the ways y’all have me all the way fucked up on that meme comparison.

First of all, Donald Trump is not the Joker. I repeat, he is NOT the Joker.

Like, if I am to nitpick like the asshole I am–which, you know, I am–I’d say that Trump definitely fits the Penguin mold more nicely? Don’t believe, check this list then:

– They are both 1 percenters
– They are both of high-society (re: that wedding photo with The Clintons)
– They are both (un)easy on the eyes (somebody tell him to put down the orange tan lotion and to upgrade his weave)
– They are both perceived as jokes initially (Penguin for his stature and Trump for his, well, everything)
– They are both users–showing selective kindness to those who appear more marginalized as compared to them in order to further an agenda (re: literally any token minority that Trump has paraded around ever).
– They are both perpetual victims (how Trump turned receiving a “small loan of a million dollars” into a bad thing/struggle, I will never understand)
– They both use literal mobs to do their biddings (re: every Trump rally ever) 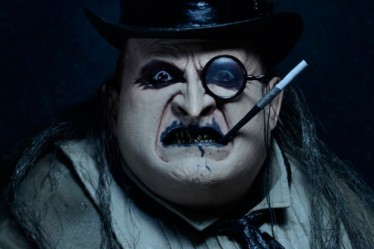 In fact, by falsely positioning him as the Joker, you’re are essentially implying that Trump is somehow going against the grain.

Excuse me, but what exactly is this grain that he is going against?

Because if I am to be frank, I have heard many a person complaining about Trump’s racist, xenophobic, Islamophobic, ableist, sexist, and nativist ways. And all of these complaints are 200% valid. But, if I may ask, are these things exactly new to this country?

Do we really want to act that obtuse?

Heaux don’t do it.

Donald’s not bringing the anarchy like the Joker might. He’s simply regurgitating what America has been feeding him since birth and being outright about it. Unlike Trump, the Joker might hypothetically take this system we’re in and explode or implode it. Donald’s not doing that. In fact, everything he is doing is IN LINE with this system. He is just way more aggressive with it if we’re being honest.

Nah. Bringing the anarchy might look like someone who’s promising revolution…but is actually WAY more radical than ya boy Bernie, ya girl Hillary, or Ol’ Orange Boy Trump.

None of these folx are bringing the chaos, y’all. In fact, the only thing Trump, in particular, is bringing is the benediction. Act III. The denouement. The series finale.

Because, in the paraphrased words of my forever fave Awesomely Luvvie, America jumped the shark about two to three election cycles ago and is now out here in these skreets–in its last season–where the writers and powers that be are throwing in every twist, turn, and unexpected plot death they can find.

Will America survive? Will we find out who did Donald Trump’s horrible weave? Will Hillary ever stop flip-flopping? Will Bernie ever find a stylist to get his life together?

Find out next time on Dragon Ball Z!!!

Seriously though. Moral of the story, PUHLEASE stop acting like any of these candidates are the second coming of [Brown] Jesus.

Because while I don’t want to be that person who says we’re screwed either way (unless you are actively voting out tyrants in your state–shoutouts to you Chicago and Cleveland)…we are kind of screwed either way.