The truth is: all of that applies. And I kind of hate that it does. I hate that she, as mediocre as she is, has been given this much power. Like, at this point, Lena is the like the Sakura to my Sasuke. Sans the romantic delusions of grandeur. She is that annoying mosquito bite in that weird spot on your ass that you can’t really reach so you just walk around…annoyed. I don’t care about her life or her existence.

And yet. Here we are.

Talking about this mediocre heaux.

I truly wish I could get my Mariah Carey on right now and say “I don’t know her” but that would be kinda disingenuous.

I know of the heaux, but I really don’t want to. Not many do. To be honest, I thought her 15 minutes of mediocrity would have expired by now and she’d fade into some distant corner of Tumblr where all they are worried about is freeing their goddamn nipples and painting their armpit hairs lime green pink and sasquatch orange.

But here she is. Showing her entitled, White Feminist™, racist, and predatory ass all over the internet once again. And unlucky for us (specifically me since I have to recount how many ways that she irks my soul), her latest offense was so annoying and so terrible that I now have to provide several reasons for why it was repugnant.

But before I do that…a recap:

So, Little Ms. Marshmellow (her actual words, not mine) recently made an appearance at the Met Gala (Met Ball). At this event, she was placed at a table with Hollywood’s rich and finest. Which included Odell Beckham Jr…and I promise that will be relevant soon. 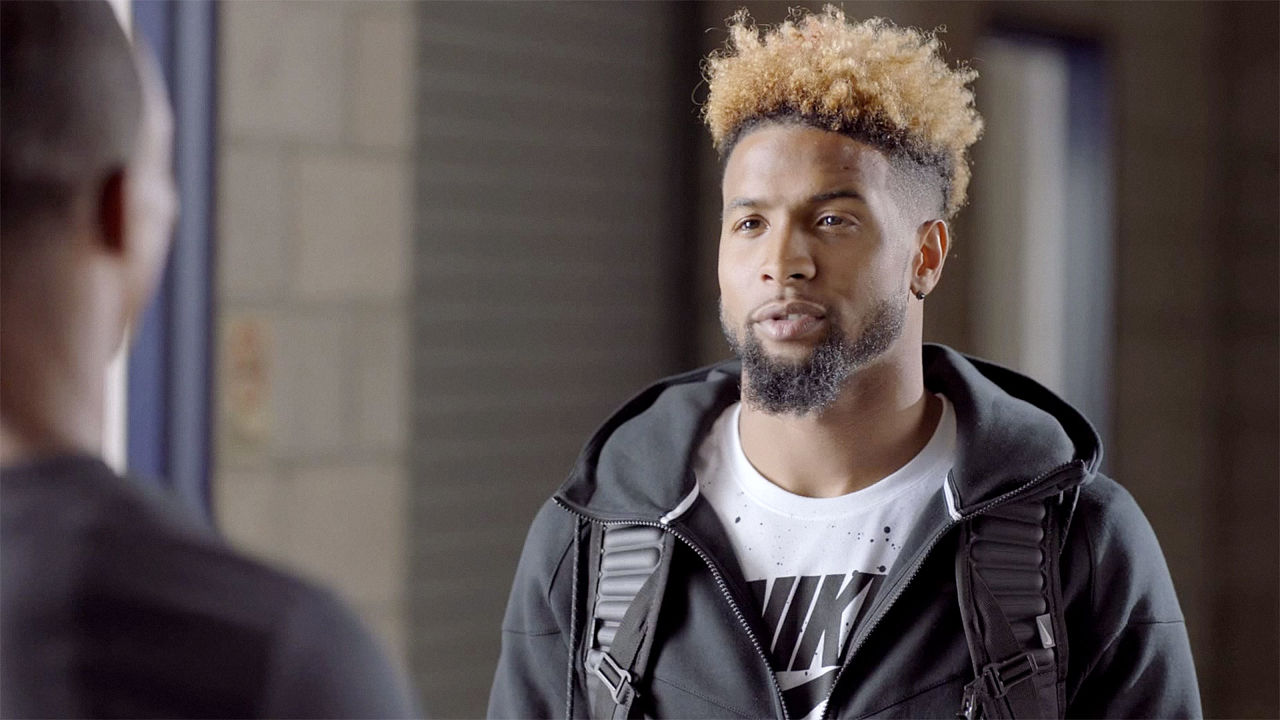 Anyhow, from what it sounds like, everyone at said table was minding their damn business but because Lena is apparently so self-absorbed and borderline narcissistic, she came up with a way to turn their silence into slights. And unfortunately for Beckham, a Black man, Lena aimed the brunt of her projections and imagined slights at him.

Now some people, those who are still naive about Lena, think her latest offense was a simple mistake. A joke gone awry, if you will. However, those of us who know better? Those of us who smelt the mediocre scent on her person from jump street? We know this is just another one of Lena Dunham’s repulsive and racist “antics” which she tries to excuse by calling herself “quirky” or even “edgy”.

Of course, that is all a crock of bullshit.

And using the Met Gala example, here are four reasons why:

1. She’s a special snowflake that feels entitled to everyone’s attention.

Lena claims that a bunch of rich folx—but especially Odell Beckham Jr.—ignored her at the Met Gala. And because specifically Beckham ignored her, he had to be a hyper-misogynist who was turning his nose up at her weight and deeming her unfuckable for that reason and that reason only.

Her words are in fact the opposite of real.

I’m baffled by the Beckham part especially, but even if I take it back to the “surface” of what she said, everything she mentions about this table are imagined as malicious slights. And because she imaginedimagines them and attempts to project them on these unsuspecting people, she, in turn, makes an ass of herself, assuming the position of a presumptive and entitled asshole. She even goes on to say that this table of rich “athletes and supermodels” made her insecure, implying they are somehow “bad” for not noticing her, not fawning over her, and not throwing themselves at her.

Nobody at that table owed her a goddamn thing. Most of them probably didn’t know her and rightfully so. What has she done in her life but be painfully mediocre (Girls included)? And yet…she was so bothered to the point that she had to create imagined slights in her head. It’s bizarre and illogical.

Which is unsurprising considering that these are standard, White Feminist™ traits (re: I MUST BE THE CENTER OF ALL OF THE THINGS™), so overall, this is not shocking.

This was one of the most interesting parts of her bizarre, self-serving, circle-jerk “interview” with Amy Schumer (another mediocre White feminist).

As I mentioned earlier, Lena zooms in on the Black guy—Odell Beckham Jr.—at this table of rich people. He is the only rich person she mentions by name and this is by no accident because after his name is dropped, she begins to whine about Beckham not openly lusting after her or leering at her to her face.

Weirdly enough, though, she makes it clear that she didn’t even say two words to this dude, but is somehow totally fine with assuming that he is a gross, misogynistic man-pig. All because he didn’t talk to her Miss Millie™ ass.

To be clear, Beckham said nothing. Nada. Seriously. All he did was look at his phone and apparently, according to Lena Dunham, he was dismissing her as “fuckable” because she is oh-so-fat and that must be disgusting to him.

Mind you, once again, Dunham said nothing to him. She imagined all of this. And had no problem repeating this. Out loud. That’s the kicker for me. She felt these thoughts were okay to share. Out in the open. And publish as well.

I don’t know what irritates me more. The fact that Lena Dunham is mad that Odell Beckham Jr. did not sexually objectify her (even though feminism opposes and seeks to eradicate that) or the fact that it shows that White women have this gross obsession with Black [male] bodies (read: the fetishization of Black bodies which we can, in fact, trace all the way back to American Slavery [since that’s where it stems from], but that is a conversation for another day).

I would ask how she [or any other White Feminist™] can think this way but seeing as she is a privileged White woman, that would be rhetorical.

How dare Beckham, a robust young buck of a Black man, not lust over her? How dare he pay her no mind? What could be more interesting than her? What in his phone was more riveting, more beautiful, and more striking to look at than her, a pure, wholesome, White woman?

I am Lex’s Disgusted Puke™. I am currently all over their keyboard.

My honest answer to that is literally anything. Anything else at all. Odell could have been playing Candy Crush or watching new episodes of Steven Universe and it wouldn’t have (and shouldn’t have) been her goddamn business. But she made it her business and that’s because she felt entitled to his attention, sexuality, and desire. And when she didn’t get any of that, she resorted to the next best thing:

Blaming his imagined rejection of her on her “fatness”.

Which leads me to my next point:

3. She loves to misappropriate fat struggles.

I’ll be honest. I rolled my eyes all the way to the back of my head and then out again when Lena blamed the IMAGINED lack of attraction between her and Beckham on the fact that she is…wait for it…”fat”.

I find that assertion slightly humorous but mostly absurd.

She is vile. Fatness has nothing to do with it.

And, while I’m on fatness, I could go into how she’s acceptably fat. Her and Demi Lovato too, matter of fact, since the latter is under some impression that she is uber fat and literally takes every opportunity to come out of her lane and mention that she is, in fact, fat and that we should all accept it.

I COULD. I really could. They’re average at best. But, you know, that doesn’t fit into their whole “perpetual victimhood shtick”…so…I guess.

4. Lena really thinks this is about her twisted and perverted “sense of humor”. But it’s not.

As usual with shitty and mediocre comedians, Lena’s first line of defense when the whole world called her out for this nonsense was to simply state that this offense was part of the “sense of humor which has kept [her] alive for thirty years”.

Again. No apology. Just deflection. And she basically implies that we all can’t take a joke.

Where is the joke? I see no joke. And that’s mainly because you’re not fucking funny to begin with.

It’s cute that you think you’re funny. And by cute, I mean worrying. Find a new hobby.

But on an even more serious note, none of what she did was funny. The shit she pulled has gotten people killed before. This stunt she pulled? It’s right up the alley of a slave master’s wife.

It makes her dangerous, but also insecure…so I will give her that. She was right to say that her shitty “humor” stems from her insecurities. She is insecure. As hell. It is blatant and blisteringly apparent and I’m pretty sure that the aliens that are refusing to see come see us because of the 2016 election cycle can see her insecurities from space.

Unfortunately for her, however, Black men and other Black folx don’t have the time or the patience to suffer because of her goddamn insecurities.

Still confused? Here it is again in layman terms:

Black people have no time to pay the price for the insecurities of White women.

Away with you, foul White feminist™.

So, here’s my advice for Lena (and by extension, her equally shitty friend Amy Schumer). Instead of making up imaginary scenarios where [Black] men are supposed to open lust after you because you are so incredibly amazing by mere virtue of being a White woman just so you can turn around and call them misogynists because they openly lusted after you, MAYBE…just maybe… you should focus on finding some semblance of, what should we call it, talent?

Because, here’s the thing: your quirky, “fat” shtick is played out, boo.

You are played out.

And the entire planet has had enough of it.