It is said that every 60 seconds (don’t quote me), White feminists do and say some shit that is so woefully asinine and obtuse that the world has to collectively Megazord Up™! and challenge them on it.

Of course, since that is very fucking often, we tend to ignore most of what they say and hope they fall into some void (a la Tonka Truck Leghorn™…even though we’re well aware she doesn’t identify that way…and even though White Feminists are rushing to defend her anyway).

Still. There will come a time where their fuckery will rise above the rest. There will come a day when the Lena Dunhams and LuciTaTay™ Swifts of the world will rise above the fray of asininity and present points that are so dense and offensive that they exceed the point of making mountains out of molehills and instead create whole ass alternative universes (#alternativefacts) out of dipshit logic.

And unfortunately, that day is today.

Or rather, I should say that day was the whole of last week.

You may be wondering what happened last week.

So here’s me presenting White feminist fuckery without (initial) commentary. 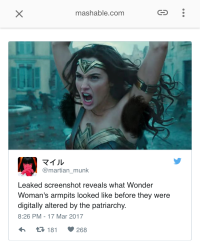 That’s right. White feminists are *upset* that Wonder Woman does not have armpit hair in her promo materials (and by extension, the movie).

There’s a myriad of reasons why this stance is an illogical one to take but because I don’t have all day, let me begin by saying this:

Even though they are some of them most privileged people in their community, White feminists live for misusing their privilege and reach.

When I first heard that Wonder Woman’s armpit hair had been turned into an issue even though it was a non-issue, I was shocked to find that White feminists (and even women who don’t identify that way) were the originators of this strange debate and not, weirdly enough, their counterparts…White Cis men.

Let the record show that I hate y’all for making me write about this.

Because as Dave Chappelle put it, they’ve BEEN in on (White Supremacy’s) heist…they just ain’t like their cut.

Which leads me to my first point:

1. Due to said privilege (and occasional boredom), White feminists pick the wackest fucking hills to die on. Which contributes to their overall uselessness to the femme community at-large.

The thing is…White feminists tend to lack insight, reflection, and common sense. They have the attention span of goldfish and the fight back of a gaggle of Magikarps. They also lack direction, which contributes to their propensity to “go ham” about the simplest shit.
I mean, think about every issue that you’ve seen “mainstream” (White) feminism tackle.

#SaveTheTitties (or #SaveTheBoobies). #FreeTheNipple. Tie-dye armpit hair. “Apologizing” to Toffee Longbottom™. Hell, even the Women’s March on Washington this year and their “pink pussy” hats.

In all of these cases, White feminists come at an issue that COULD BE SERIOUS in the right time and place (save Tacky Lemur™. Fuck that heaux!), and completely trivialize it.

The over-sexualization of women’s bodies has been happening since the dawn of time and is something that is complicated by race, age, and explorations of gender. Reducing it to simply “nipples” is not revolutionary. It is fucking absurd and completely misses the point.

And as for *those hats* at the Women’s March (tbh, the Women’s March in general)…I’m actually failing to see what the original purpose was. In fact, all I saw was gross transphobia on display (which is not surprising, but still disgusting if you are familiar with the rampant TERF-ism that is rooted in White feminism) and an intense—and almost purposeful—misunderstanding of what should have been a straightforward ass point:

White men in power like The Unstable Orange™ get away with all sorts of sick shit. Including sexual assault. And this assault can be carried out against anyone, including those with (or without) vaginas.

Instead of that being the focus, the focus was instead put on bedazzled and glittered pussy hats. And posing with officers wearing those hats (because fuck how often Black women are assaulted by the police, right? Daniel Holtzclaw, anyone?). And praising the so-called Women’s March as a “peaceful protest” that had no arrests (because fuck #BLM and #NoDAPL right?). And silencing feminists who deviated from the White, Cis, norm (yeah, I didn’t forget that y’all cut off the mics of several non-lily White “feminists”, including that of Raquel Willis’ )

Compared to all of these things, Wonder Woman’s #ArmpitGate can’t even hold up, because THERE ISN’T EVEN A POINT TO IT.

Which ironically leads me to my final point:

2. Of all the things to be pissed about in a Wonder Woman movie, White feminists are choosing to be pressed about her body hair…or lack thereof.

There are plenty of things to be pissed about when it comes to Diana’s upcoming film. 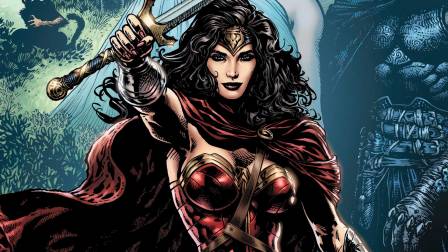 Y’all could be pissed about the lack of diversity in this film’s version of the Amazons, even though it is well-documented how colorful and inclusive that group is (Bana-Mighdall Amazons. Have you even heard of them?)

Y’all could be pissed that it appears that the film might be going with Wonder Woman’s New 52 origins…which includes the megalomaniacal serial rapist known as Zeus being her “technical” father.

Y’all could be pissed about Wonder Woman’s lackluster promotional campaign even though her movie comes our BEFORE the Aveng–I mean Justice League.

But…no. Please get upset about her, urm, body hair?

I don’t even know where to go with this one really. Not only do I not give a fuck about this heaux having body hair or not having body hair, but I’m a little flabbergasted at why we are having this conversation to begin with.

Like, if we follow typical White feminist logic, raising hell over Wondy’s armpits is “misogynistic” to begin with.

So, then, by this same line of thinking, why are White feminists being self-defeatists and dragging themselves over something as menial as armpit hair?

WHERE IS YOUR LOGIC, SUSAN?

Because if you really gave a damn about Wonder Woman, you wouldn’t be screeching over her armpits and sabotaging her damn movie already (THE NEW YORK TIMES PICKED THIS ARMPIT NONSENSE UP. WE COULD HAVE USED THAT SPACE TO TALK ABOUT THE DAMN MOVIE!)

You don’t care. Caring would be you going beyond the superficial stuff like body hair. Or nipples. Or pink pussies.

Caring would turn this into a non-issue. Caring would make you useful to actual feminists. Caring would mean that you’d stop antagonizing trans women and Black women with Rachel Delusional™ by giving her a platform. Hell, you caring might mean us making more headway on those “missing” (read: stolen and kidnapped) Black and Brown girls in DC.

And that, lovelies, is what makes you…White feminists.

10 thoughts on “Wonder Woman’s Body Hair Is Not A “Feminist” Issue. It Is A White Feminist Issue”